Reed and Rowan, 6-month-old purring machines, are the longest residents at the Clifton Animal Shelter in New Jersey. The siblings were brought to the shelter with their mom and two brothers who have all gone to forever homes. 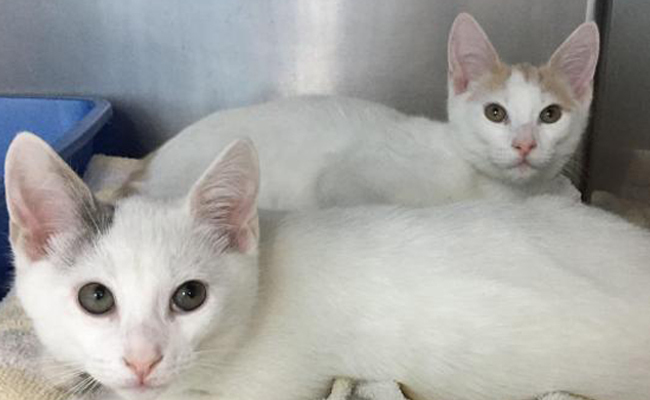 “We call them the dream team. They sleep on top of one another, and they purr while sleeping, eating and playing,” said Liz Taranda, vice president of the shelter and cat room manager. “They are lap cats who love to be held together while giving nose rubs to whoever is holding them.”

The brothers are bonded and will only be adopted into the same home. It’s not unusual for shelters and rescue groups to encourage potential adopters to adopt a pair of kittens rather than going home with one cat.

The Itty Bitty Orphan Kitty Rescue in San Jose, CA, requires that young kittens be adopted in pairs unless adopters have an existing kitten or young cat at home. According to the shelter, this policy is not based on a desire to increase adoptions but rather to ensure that kittens are adopted into homes that offer the best possible environment for their social development.

There are many benefits to adopting kittens in pairs

Besides saving two lives, there are many advantages to adopting kittens in pairs. Kittens tend to need more time and attention than adult cats and two together will keep each other company. The acclimation to a new home will go smoother, too, because a bonded pair of kittens won’t need separate transitional rooms. All they require is one litter box and two dishes (also true when adopting an older bonded pair of cats). “When you adopt a pair of kittens you get double the unconditional love,” Taranda said. “Having two kittens together also makes it easier if you have to go to work every day. They are at home cuddling and spending time together instead of feeling lonely and crying at the door all day waiting for you to come home.”

Staff at the Clifton shelter never try to convince potential adopters to take two kittens if they only came looking for one cat. It’s not unusual, though, for visitors to go home with double the fun after observing kittens interacting with one another in the playroom. Sometimes it’s an older bonded pair that wins the hearts of visitors.

That’s what happened to Tracey Pirozzi when she visited the Clifton shelter after losing two of her cats within six months of one another. She wanted a companion for her one remaining cat. A longtime volunteer and animal advocate, she asked to meet cats overlooked by other visitors. Pirozzi ended up adopting a pair of bonded 4-year-old siblings and named them Mystique and Mikah. They were hard to place because they were black, older cats who couldn’t be separated. The pair has settled beautifully into their new home.

“There’s definitely an advantage to adopting two cats together,” Pirozzi said. “They keep each other company and play together, which definitely deters them from getting into mischief.” Why it’s a good idea to adopt kittens in pairs:

Cat Behaviorist Pam Johnson-Bennett’s article Adopting a Kitten? Make it a Doubleoffers good information on the benefits of adopting kittens in pairs.