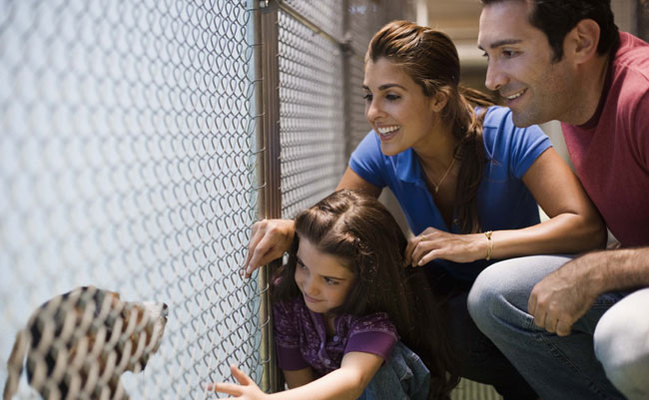 Adopting a dog doesn’t mean you’re inheriting someone else’s problem. Learn the truth and some common myths about shelter animals.

It’s a sad fact that each year approximately 670,000 dogs are euthanized in animal shelters across the United States. It happens because too many dogs enter the shelter and too few people consider adoption when it comes to getting a new pet. Many buy into one of the most common myths that when you adopt a dog from a shelter you are inheriting someone else’s problem.

The truth is that shelters and rescues are brimming with happy, healthy pets just waiting for someone to take them home. Most shelter pets are surrendered because of a human problem like a move or a divorce, not because the animals did anything wrong. Many are already housetrained and used to living with families.

“When you adopt a shelter dog you are most likely bringing home a dog who has good manners, is leash trained and knows some commands,” said Ellen Ribitzki, kennel manager for the Bloomingdale Regional Animal Shelter Society (B.A.S.S.) in New Jersey.  “In addition, shelter dogs are temperament tested so adopters will have an idea of a pet’s personality―whether he/she gets along with other dogs or with cats and young children.”

In late August the Herrera family visited B.A.S.S. to find a companion for their rescue dog, Charlie. The family had just lost their beloved Roxy, a 12-year-old boxer, and all of them―including Charlie―were mourning the loss.

“We started visiting our local shelters because we know what love rescue dogs can give,” Robin Herrera said.  “We knew that we didn’t want a puppy but we were looking for a dog young enough to be playful. We also knew that Charlie had to approve of the new dog.”

At B.A.S.S. they fell in love with Sophia, an 18-month-old German shorthair pointer mix, an energetic fun-loving and playful dog. Luckily Charlie approved and Sophia is now a much-loved addition to the family. 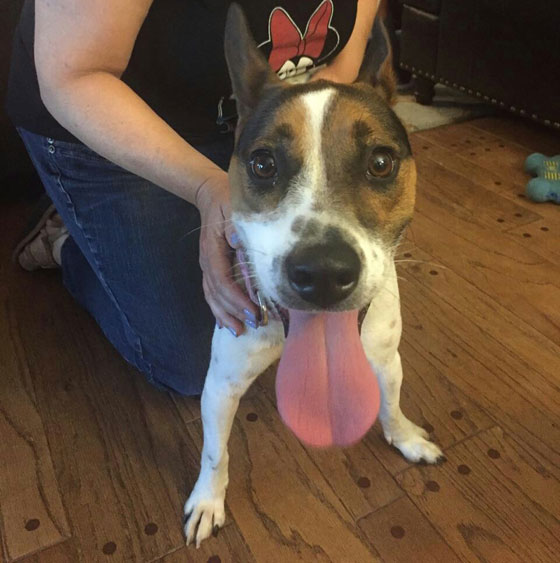 The Herrera family fell in love with Sophia, a German shorthaired pointer mix, for adoption at the Bloomingdale Regional Animal Shelter in NJ.
Image courtesy of the Robin Herrera

“Sophia and Charlie are constantly hunting for chipmunks in our yard,” Herrera said. “They love long walks together and enjoy snuggling with us at night.”

Ribitzki said that dogs are rarely returned to B.A.S.S., and when it does happens it’s because of health or life changes―for example, allergies or a job change―and not behavioral issues.

“The majority of dogs and cats are surrendered to B.A.S.S. by heartbroken owners in tears because they can no longer care for their beloved pet,” Ribitzki said. “Unfortunately, with the recent catastrophic hurricanes, there will be a lot more animals impacted and more demands on rescues and shelters.”

October is Adopt a Shelter Dog Month and a perfect time to help dogs in shelters across the country find loving forever homes. If you’re thinking of adding a dog to the family, please consider adopting your next animal companion.

Myth #1: Dogs only end up in shelters because they have behavior problems or are sick.

Truth: Some dogs do end up in shelters and rescue groups because their owners can’t handle their perceived behavior problems (which may be as easy to fix as an older puppy reluctant to housebreaking), but most of them end up in shelters because of a combination of these reasons:

Myth #2: You never know what you’re getting with a shelter or rescue pet.

Truth: When you deal with a reputable shelter or rescue group that gets all vetting done―spay/neuter, vaccinations, deworming and heartworm preventative―and temperament tests all of their adoptable pets, you do know what you’re getting!

Myth #3: You have to start the bonding process when your pet is a baby.

Truth: Rescued pets are often noted as being “grateful” for their new lease on life. Forming a bond with an animal whose life you saved comes naturally for most people. Dogs become attached to the people who take care of their basic needs, no matter when those people came into their lives.

Myth #4: Shelter animals are not as clean as pet store animals.

Truth: Not only is this untrue, but the conditions of many breeding facilities or puppy mills (which supply pet stores that sell dogs) are nothing short of horrific. Puppies born in puppy mills are usually removed from their mothers at just 6 weeks old and are housed in overcrowded and unsanitary wire-floored cages, without adequate veterinary care, food or water.

Myth #5: Adopting big or very strong dogs is a bad idea if you have little children.

Truth: There’s no evidence that big dogs are more likely than small dogs to harm children. A dog’s behavior is a function of many factors including breeding, socialization, training, environment and treatment by owners.

Myth #6: Getting animals from breeders is safer because the breeders know the animal’s bloodline and family history.

Truth: As a result of their breeding, purebred dogs very often have genetic disorders and medical issue predispositions, certainly no less often than shelter dogs. Also, while bloodlines and histories are useful tools to assess an animal’s value, they are limited in terms of predicting behavior. On the other hand, shelters are motivated to save lives and make strong matches. Some use science and sophisticated tools to appropriately pair up animals and owners and are happy to share everything they know about each animal.

Sources: Second Chance for Pets in Clinton, IL, and the ASPCA

The Humane Society of the United States offers the top reasons to adopt a pet.