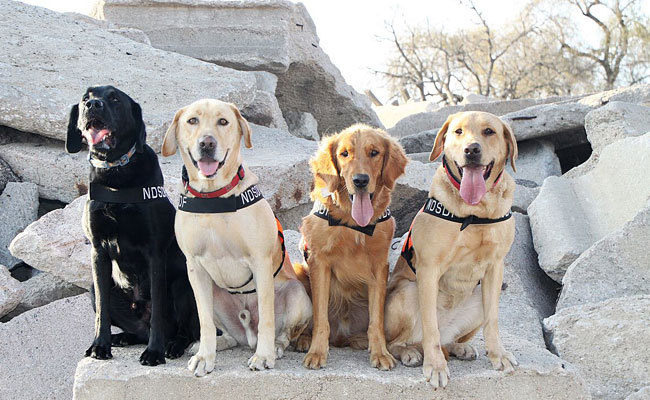 While hundreds of pets were being removed from flood zones in the wake of Hurricanes Harvey and Irma, search dogs were entering those very same areas to find people who might have opted to stay behind and were now trapped by rising flood waters. The search dogs also quickly combed debris piles that were washed downstream to be sure no one was buried beneath them.

September is National Service Dog Month and a great time to honor the wonderful dogs trained by the National Disaster Search Dog Foundation (SDF). The nonprofit organization located in Santa Paula, CA recruits and trains shelter dogs and partners them with firefighters and other first responders to find people trapped or buried alive in the wreckage of disasters. Most recently twelve SDF-trained search teams were deployed to help in the wake of the earthquake in Mexico City and Hurricane Maria in Puerto Rico.

What types of dogs excel in the SDF Program?

“Our trainers look for extremely driven, toy-obsessed dogs that don’t just want the toy, they need to possess the toy,” said Denise Sanders, SDF Communications and Development Officer. “This drive is what carries them through the process of learning to bark when they smell the scent of a live human—that toy is their reward and they will do anything to get it!” 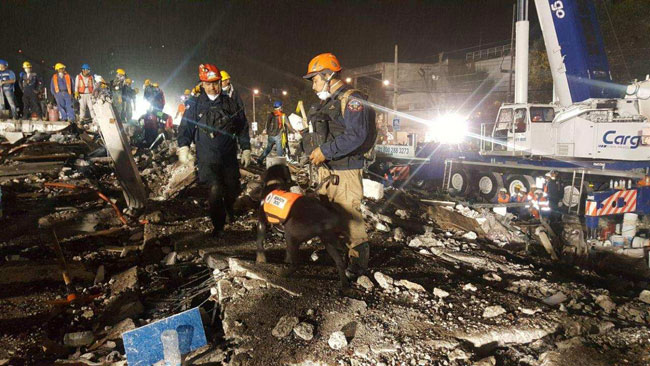 Maxim, a black Labrador rescued from the Humane Society of Del Norte in Crescent City, CA, and firefighter-handler Luis Garcia of Baja California Task Force 3, help search debris in the aftermath of the earthquake in Mexico City. Image Courtesy of the National Disaster Search Dog Foundation

Sanders said that it takes eight to 10 months to train a search dog (any dog who doesn’t complete training is placed into a loving home) and two weeks to train a handler at the SDF training center. Dog and handler teams continue to train daily together and weekly with their training group. After anywhere from eight months to one year, the search team is generally ready to take their Certification Evaluation (administered either by the Federal Emergency Management Agency (FEMA) or the State Urban Search and Rescue Alliance). This certification makes them deployable and ready to respond when the call comes.

While much of what the SDF-trained dogs provide is the comfort and confidence of knowing that no one is left behind in the wake of natural disasters, they also assist in finding people.

For example Jester, a Border collie mix who was on the euthanasia list when rescued from the High Sierra Animal Rescue, and his handler Orange County Firefighter Davis Doty helped find a man who had been reported missing in Laguna Beach in 2009. In 2010 following the devastating earthquake in Port-au-Prince, Haiti several SDF-trained teams helped find numerous people buried beneath the rubble. And in 2015 six SDF-trained dogs helped find a teenager buried in the rubble following an earthquake in Nepal.

When they’re not on deployment all of the search dogs live at home with their handlers or at the fire station when their partners are at work.

“The dogs and handlers are together 24/7 so they are ready to go at a moment’s notice,” Sanders said.